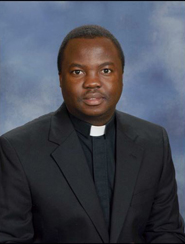 FR. ANTHONY MPUNGU - Is originally from the Archdiocese of Kampala in Uganda. He was ordained a priest on August 13th, 2005 and served in Uganda as a Parochial Vicar in two parishes and later in the Office of Education as Education Secretary. He joined the Diocese of Richmond Virginia in December of 2011 and was assigned as Pastor of St. Peter the Apostle in Lake Gaston and St. Richards in Emporia. Father Anthony has been Pastor here at Saint Mark since August 2015. and loves the priest ministry because it brings Jesus closer to the people. 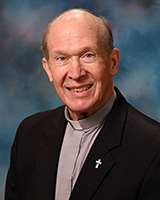 DEACON MIKE JOHNSON – and his wife, Jessie, have been members of St Mark since the days of Mass at Indian Lakes Elementary (1983).They have two adult sons who are both recently married. Mike served on Parish Council, including a term as its chair in the early 1990's. He's served the parish as a Lector, Eucharistic Minister and Mass Coordinator. Deacon Mike retired in 1998 after 22 years of Naval Service. He began formation for the Permanent Diaconate in 1999 and was ordained in March 2003. Mike enjoys full-time ministry and also likes to work-out. He is an alumnus and ardent USC Trojan fan. 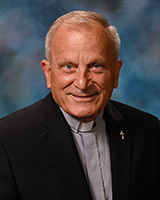 DEACON JOHN KREN – He and his wife Chris first joined St. Mark in 1983. They have three sons and three grandchildren. Deacon John holds degrees from Marist College, Old Dominion and St. Leo Universities. He began formation for the Permanent Diaconate in 1999 and was ordained in March 2003. He enjoys sailing, kayaking, woodworking, and cooking. Deacon John is Director of the Permanent Diaconate for the Diocese of Richmond.